Before heading off for the Christmas break in Oregon, I strolled into Blackrock to pick up two books for the trip.  First stop was Carraig Books, a little second hand bookstore on the way into the village opposite the library I hadn’t been into for years.  The front of the shop was mainly old books about Irish history and culture. The rear section was split evenly between a bizarrely large section of books on Catholicism (you have to see it to believe it), and one with a mix of general history and fiction.  What stood out though was an old portrait on G.K. Chesterton on the wall for sale for 750 euro, guarding the Catholic section, which I thought quite fitting considering his many works on apologetics. 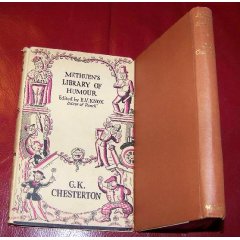 Anyway, down the back was a treasure trove of books by the big man and I picked up a little old book from 1933 called ” Methuen’s Library of Humour: G. K. Chesterton ” which is a collection of some his amusing essays on various topics, both trivial and serious, from his Edwardian day.  There was a list of other authors on the inside leaf that were also featured in the the same Methuen series, although the only ones I had heard off were P.G. Wodehouse and A.A. Milne.  It is interesting how few authors endure the generations, and Chesterton is a man whose profile hasn’t deserved to fade as much as it has.

I then proceeded to Dubray books to get something a little more contemporary and grabbed a copy of Nassim Nicholas Taleb’s “The Black Swan: The Impact of the Highly Improbable”.  This guy has turned into a media darling since the credit crunch started, I was interested to see what the fuss was about.

The Chesterton collection I devoured during the horrendous 46-hour weathered delayed journey to Portland, but Taleb’s book took me the trip to finish, as I only managed to read it in pieces between Christmas engagements. His quirky writing style actually suit this choppy reading quite well (check out this taster on his website).  The two men write about very different topics in very different eras, and yet have very much in common.

Chesterton’s essays ranged from light hearted discussion on the joys of lying in bed and the lack of cheese related literature (“Poets have been mysteriously quiet on the subject of cheese” ), to more scathing attacks on the changing face of his society.  He throws particular scorn at the philosophers and scientists of his day, who he refers in the singular as just “The Professor”, ridiculing his leaps of faith into material reductionism and his blind application of Darwinian theory to every realm of society’s problems.  I guess his debunking method could be referred to as in the reductio ad absurdum school.  A dogged love of the traditions of his homeland also shines through in almost all the stories.

The main focus of Taleb’s book is to the debunk almost all modern financial mathematics, claiming that we rely too heavily on past experience and rigid mathematical models to predict a future whose greatest changes are caused by entirely unpredictable and improbable event he refers to as “Black Swans” ( Basically, all swans were assumed white until those ugly ones were discovered in Australia).  He saves particular ire for Nobel prize winning economists who use Gaussian distributions to design risk strategies.  I particularly enjoyed these sections, as I share similar opinions on economists in general.  However, despite the aim, he meanders at will into all sorts of shorts essays discussing everything from politics to his background in Lebanon, through to who he considers to be the world’s greatest thinkers.

Both books were very enjoyable are for similar reasons.  They made me think about everyday things in a different way, had very distinctive writing styles and unique humour. Both are attacking dogmatic self-righteous establishment views, and there take downs are very convincing.  I guess what I find most fascinating is just how broad a range on topics that they are able to discuss while still knowing what they are talking about and staying within their depth. So many modern authors have an incredibly narrow focus and concentrate on a single pet theory.  These two guys are able to step back, see the big picture, and how badly the modern theory or mindset fits into it.

Not much to complain about really but if I had to, I guess sometimes Chesterton’s christian drum can bang a little too loudly in the background, while Taleb sometimes gets a little too nasty when describing the suit wearing Nobel prize winning economists who live in the Bell-curve hills of “Mediocristan”.

With all this cold weather, if only a Taleb or Chesterton would come out of the woodwork and write a meandering humourous book taking down the dogmatism of global warming. Oops sorry, my error, I mean climate change. That’s what they are calling is now, right?