There was a special Primetime program on RTE on Wednesday dedicated to the country’s economic predicament. The first half was heavy with the doom and gloom that has become so prevalent on the TV here.  A set of interviews with unemployed brickies and couples in negative equity, followed by a panel discussion, where the main participant from what I could see was George Lee’s ever more deeply furrowed brow.  However, to second half tried to be a little more upbeat, and the presenter,  Mark Lyttle, went out in search of some optimism and hope, exploring roads out the current mess.   The key message thrown forward was that a “Smart economy” (Knowledge Economy is so 2008) of innovation and invention would be required.  Several companies were profiled, and there was a discussion on how to drive invention in the country.

And who were these innovative companies?  NTR,  Creganna and Steorn.  Apparently NTR, of West-Link fame, have bought a company in Arizona developing solar Stirling engines, which while innovative, is only going to fatten the company’s coffers further, but not drive any real employment in Ireland.  It is still an improvement on gouging commuters for a living.  Creganna are a positive story, an indigenous producing innovative and viable biomedical products in an industry in which Ireland can compete.  The country badly needs more companies like it.

Saviours of the economy?

This brings me to Steorn.  Initially I laughed out loud about how we were pinning our hopes on a company that claims to have invented a perpetual motion machine.  Now while I am almost 100% sure that they are either a) not very good at taking correct measurements or b) a bunch of chancers and the whole thing is a continuous PR exercise to loosen gullible investor’s wallet, I tried to take something positive from it in these pessimistic times.  And there are some elements of the story I like.

Firstly, we need people challenging the so-called Laws of Physics, whether they are complete crackpots or people conducting legitimate research.  The term Laws of Physics has always made me uncomfortable.  It gives off the impression to the general public they are gospel, set in stone, some sort of platonic forms.  Whereas all they are in reality are base scientific rules we have learned from empirical evidence.  All the evidence we have found so far fits the rule, but we can never proves it is true.  The only thing we can do it possibly falsify them, and then come up with and new and improved rule.  Newton’s Law of Gravity becomes Einstein’s Law of General Relativity and so on.  And while this does not happen very often, it is no harm to have people continually pounding away at the foundations of science, just to make sure they are as solid as we think they are.

And then there is how Steorn claim to have invented the technology – Serendipity.  Accidentally discovering a perpetual motion machine while developing an anti-fraud device for a cash machine?  In this case it seems a little too big a leap to be credible.  But serendipity is the key to almost every great invention.  It is not too be confused with plain luck.  Louis Pasteur probably put it best when he said”In the fields of observation, chance favours only those minds that have been prepared”.  After the show, I talked to my dad about this idea and he reminded me of an invention of his own that came about from serendipity.  Working away in the UCD veterinary lab in the early 1960s, he was trying the concentrate the level of antibodies in a blood serum using a centrifuge.  He accidentally spun a test tube from the freezer than had not fully defrosted.  Along with noticing his mistake, he also noticed that some thick liquid that collected at the bottom resembled concentrated serum.  He tested it and found it was indeed concentrated serum.  Somehow, spinning half frozen serum was more successful than the regular method.  After a few more experiments, fine-tuning the temperature and centrifuge speed, he submitted a letter to Nature magazine,  “A Freezing-thawing Technique for Concentrating Antibodies in Serum”  outlining his method, although at this stage he did not know the exact underlying mechanism, merely that it worked.

Back in the 1960s, scientists only read journals in libraries, and without photocopiers, they would mail the authors for reprints.  My mum pulled out a dusty old bag that had been stored up in their attic, which contained over five hundred letters from laboratories and universities around the world that had been sent to my dad asking for reprints of the published letter.   Looking online, many biological and medical science papers in the 1960s cite my dad’s letter in Nature, with one Russian scientist referring to it in his 1966 paper as “McErlean’s Method of Concentration”.  Eventually a chemist wrote to him proposing the mechanism, and they fine-tuned the process further.  Essentially,  the ease at which serum is removed is due the to the fact that the water freezes first and the substances suspended or dissolved therein are trapped in the lattice work of ice crystals in a concentrated form and are removed by centrifugal force.  If the temperature is too high, the water doesn’t freeze, too low and everything gets frozen.  He never patented the idea, and it simply became standard laboratory practice over the years, his association with the idea fading from view.   He also managed to recover salts from solution using the same method, and it occurred to him later it could possibly be used as another method for de-salination of seawater. 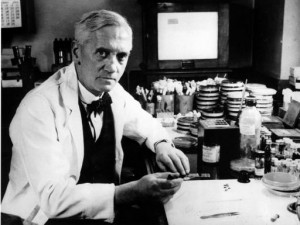 Unlike in this picture, Alexander Fleming's lab was apparently an untidy disorganised mess. If he had been tidy, we mightn't have antibiotics today

Serendipitous discoveries seem to be most prevalent in medicine, biology and pharmacology.  Possibly the two biggest weapons we have in fighting diseases, antibiotics and vaccination, were discovered accidentally by Alexander Fleming and Edward Jenner.  Fleming’s sloppiness meant fungus managed to grow on a sample he had forgotten about, and Jenner happened to be working in a rural community where cowpox and cow maids could be observed, something not possible if he had be working in an urban laboratory.  There was an rural myth about cowmaids being immune to smallpox and he was able to join the dots.  Another newer invention, reminiscent of Jenner’s, is that of this years Young Scientist winners, two 13-year-old boys from Cork, John O’Callaghan and Liam McCarthy.  They developed a cheap test for measuring the level of infection in dairy cows, by investigating a belief that infected milk visibly thickened when a drop of washing up liquid was added.  I doubt the initial person who spotted this deliberately added a drop of washing up liquid, and I doubt the two enterprising boys would have investigated and developed it further had they not lived on dairy farms, heard about the belief, and worried about the financial effects of undetected infection.

The bottom line to all this is we can try and plan a “Smart Economy”, but pouring money from a government venture capital funds into start-up companies and continuing billions in funding through SFI to heavily directed university research programs will not necessarily produce any immediately useful innovation.  Forced innovation has a very poor record. Instead, we need to focus on creating an army of prepared minds rather than a handful of PhDs, an army who are taught to question their everyday work, whether they are milking cows or designing anti-fraud systems for ATM machines.  And eventually someone, somewhere will eventually have a “That’s weird” moment, realise their mistake or result wasn’t a necessarily a bad one, and go on to discover something game changing.  And creating prepared, questioning minds starts well before university or industry, in a school system that promotes thinking, not learning things by rote, and practical application,  not repetitive homework.  And it would also help if we stopped being gloomy, downbeat and seeing failures before they happen.  And if they do happen, they are not always a bad thing.