A 1976 JVC VCR, metallic silver with a fading touch of wood.

In the beginning, they were covered in wood. It was so obvious really.  The furniture was made of wood, and they sort of were like furniture after all, these new fangled devices.  So their ugly innards were covered in wood panneling so they could blend in with the neighbours.  The 1920s phonograph, the 1930s radio, and through to the bulging 1960s colour television.  Cloth grills were added if ventilation was needed.  Even the first Apple computer in the 1970s was bundled into a wooden box.  It lasted for their first fifty years, but at some stage in the 1970s, someone somewhere, probably in the bowels of a Japanese electronics manufacturer, decided that consumer electronics would shed their wooden coats.  And they would not be red or blue or yellow or green.  No, to be taken seriously, consumer electronic could not be wooden or colourful.   They would oscillate between black and silver, metal or plastic. 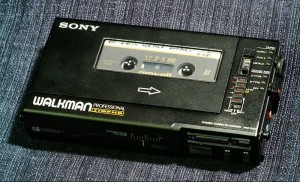 First up was silver.  Aluminium, chrome or brushed steel ,it didn’t really matter, the bottom line was silver coloured metal was futuristic.  Early attempts had leftover wood panels, but by the end of the 1970s, all traces of wood were gone.  And sets in the panels were rows of solid shiny metal knobs for tone,volume and balance.   Some made nice clicks as they were turned, others just had smooth bearings.   With no flashing LEDs or displays yet on offer, everything was nice, solid, and shiny.  It all looked professional, like real industrial products, not cheap consumers versions.

But maybe that was just from looking through the eyes of  my 1980s childhood.   Because the electronics of my younger years were very different.  Sure, other people parents might have had an old silver JVC Hi-Fi in their houses, but by the mid-80s, everything had turned black.  It was a matt , sometimes grey black, and mainly plastic.  Our Sony Trinition came a flimsy grey-black plastic case, with a single big red LED lighting up when the remote was used.  The Walkmans, CD players and the VHS players, they all were blackish grey or grayish black plastics, with hints of colour painted on to explain what the buttons did.  Now and again, an manufacturer would launch a yellow “sport” walkman or a red TV aimed at teenagers, but nobody took them seriously, colours just looked childish and amateur.

It fended off the skirmishes with colour, but after a long reign, sometime in the mid-90s, black began to fade and silver started coming back.  I think I first noticed it when wide-screen TVs arrived.  But is soon spread to everything.   Black became passe and silver came back.  But this spell of silver was not a return to the 70s.  It was matte silver, with much less metal and many more acres of plastic.  And while the black plastic of the 80s had grown on me, this was a spell that never did. 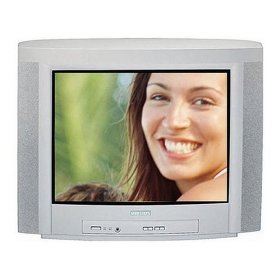 Before Christmas, I went into town to buy a new flat screen television, and was greeted with an array of shiny black devices.  I had never noticed this last changeover happening.  Maybe it is because I have had a general apathy for keeping up with technology in recent years.  But the new black of the flatscreens was not the matt grayish black of a circa 1985 Sony Trinitron.  These were solid black with a shiny clear plastic coating.

So we are into the fourth phase and the fourth decade of this dance between black and silver.   Clothes fashions are generally very hard to analyse, with no trends that are in any way analysable.  But the colouring of consumer electronic seems so rhythmical, moving between black and silver every ten years of so.   There are a few strange things about this.    Looking at the 40-odd flat-screen TVs in the shop, I noticed not a single one was silver.  Now, you would think maybe one manufacturer would try to stand out from the crowd, but none appear brave enough.  Perhaps it is fear.  While releasing a light coloured TV amidst a sea of black screens might convince consumers it is next generation, there might be a greater risk it appears older generation.  And why does it go from silver to black or gray, and then back again?  Why do music players or DVD player designers never make them red or blue?  It’s not like clothing vogues still to black and white.   Why does each rule for a decade before ceeding control to the other extreme?  Maybe it is a big conspiracy.  The companies plan the changes so that we have to upgrade all our electronics so that everything matches.  We could have a black hi-fi clashing with the Silver television, now could we? 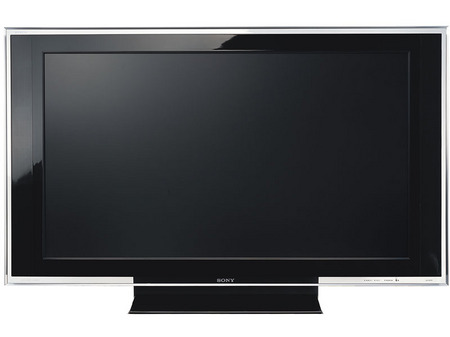 Back is black - A modern day Sony Bravia flatscreen

So I am going to make a bold prediction.  In about five years time, I have no idea whether I will be watching my TV in a new super ultra hi-definition format or as some kind of hologram projection, but I am quite sure if the device comes in a box, it will be a silver toned one.  And I am hoping it will be brushed steel, not plastic